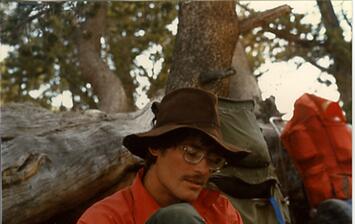 Jim on his student course in the Rockies in 1974. Photo courtesy of Jim Acee.

Jim Acee was a student on the first NOLS semester course, a Semester in the Rockies in 1974, a NOLS instructor in the Rockies, Baja, and Utah, and a successful businessman and professor. In Part 2 of his interview, he talks about some of his favorite—and frightening—experiences in Baja California in Mexico (Read Part 1 of his interview).

Tell us a bit about the beginnings of NOLS Mexico.

First of all, [Baja director] Tap Tapley sailed a sailboat down to Baja and took equipment down there and started the school … Baja was sort of like the Wild West: it was a territory, there was no place to get paperwork or anything like that … and in those days you never knew if you were going to get down there or not. The road was washed out every spring, with the rains, and people would get stuck, and ferries would be transporting only vital necessities…and then if you would try to communicate with the home office [in Lander], you were “no hay linea,” which means there’s no line to the United States.

So basically when we were down there, we did pretty much whatever we wanted to do, without any firm direction from Headquarters in Lander…it was a nice opportunity for us to do things the way we wanted to do them and the way we felt was the right way to do them, and it ended up being a good crew of people that did the right thing. We were on our own and we did a fine job down there, in my opinion.

When Bart Womack came down and became second in command he encouraged Tap to become more adventurous … Bart ended up being very adventurous and doing routes that hadn’t been done by organized groups before out into the Sea of Cortez, around Punta Concepcion, down to Loreto, then eventually even from Loreto down to La Paz…

You know, when you’re trying to do new things [like start a new NOLS branch] you stretch, and you do put yourself into … more adventurous situations. If you do have this love of nature—and you’re competent—you can do it with a calculated risk. 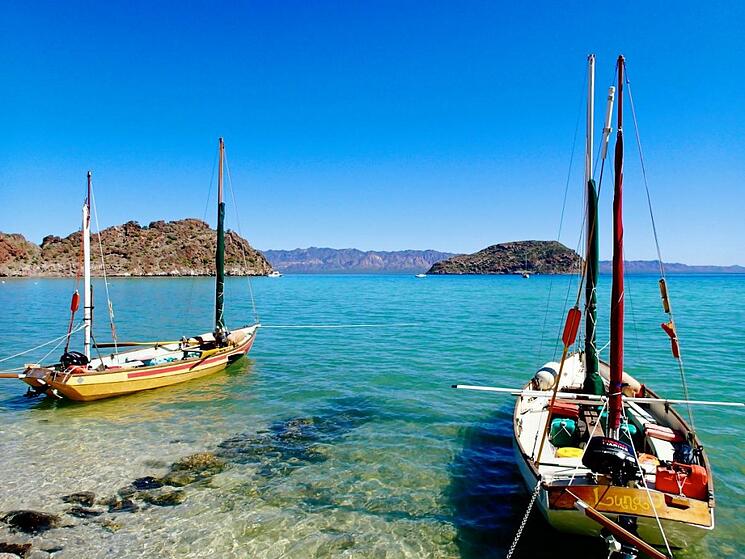 What did you enjoy about working in Baja?

The comradery and adventures shared with the NOLS Baja instructor team of Bart Womack, Lucy Smith, and Walter Fish was something very special. Finding new land and sea routes in remote Baja was quite a thrill. I loved the pristine diving in those days. Seeing the environmental flora/fauna collapse of some underwater areas of Baja over the last 35 years is quite sad.

Can you talk about some of your experiences as an instructor? 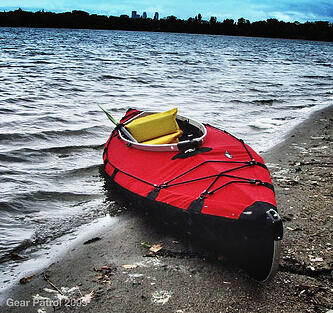 This is a Folbot kayak, similar to what Jim & Walter were paddling on their seven-day epic. These are collabpsible boats "made more for pleasure paddling on lakes than high adventure sea kayaking," according to Jim. Photo courtesy of GearPatrol.com

The most dramatic experience as an instructor involved an unplanned seven-day survival experience. I was training fellow NOLS instructor, Walter Fish, in sea kayaking and snorkel diving on a remote peninsula in Baja for two days when a seven-day wind storm stuck and we were stranded there with very little food and water. We were down to drinking a cup of water a day and surviving on what few crabs we could spear on the shoreline rocks. Diving for food proved too dangerous in the crashing waves on volcanic rock. We tried it once.

[After three days, they attempted to cross to the mainland and were driven back to shore by the wind and waves. Delirious, they created a pool near the shore and erected a palm tree log called “Jake’s Tool.”]

We remembered there was a little fishing camp [on the island] … all it was was just a palm frond shack, and it stank like crazy because there’s fish guts all over the place, and we decided to go there just in case there might be somebody that might be able to give us some food or water. In the meantime we were trying to eat Ferocactus, and that didn’t work very well...

When we got over there there was absolutely nothing there. It was just a dilapidated shack and an old rusty 55-gallon drum, with a lid on it. We opened up the lid. It was filled with fresh water. The fishermen used it as a storage for their water. So we had water, and once you have water, you know, everything else is pretty much OK.

On the last day, the winds were down low enough that we were able to make the crossing. We made the crossing over to the other side, we were about 15-20 feet from shore, in about 10 feet of water, and the waves were still coming in, but we had made it. We went to high five each other and got the boat turned sideways, a wave hit us and turned us over and we dumped everything into the water. And we sunk it! But we had our dive equipment so we just dove down and got everything…

[Several years later, Jim returned to the same spot to visit some friends for a kayak trip.]

We paddled past Punta Conception and in the distance on shore was our Palm Log, still standing. I mumbled something like, "Well, I'll be damned." My local resident paddle partner saw me looking at the upright log and said, “Oh, that's a log that someone erected some years ago and it’s a bit of a landmark for rounding the Point. It is called "Jake's Tool."

When we gringos from NOLS were the first to regularly go to diving places along the coast, we sometimes named the places ourselves in English…either not knowing the Mexican name or not being able to pronounce it or remember the Mexican name. Sometimes those names stuck for years to come with other gringos and NOLS folks.

How has Baja changed? 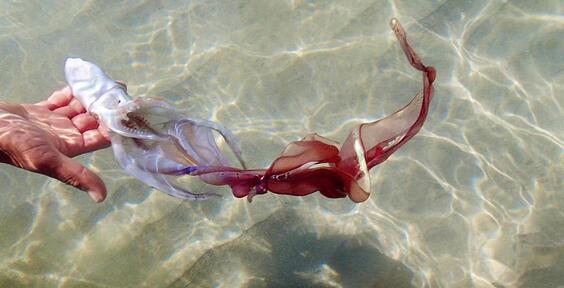 One place Walter and I named "The Aquarium" because it was in this little cove and it was soooooo full of large, medium, and small fish, shellfish, and colorful underwater fauna… Sadly, over time there were less and less colorful fauna, shellfish, and large fish. Then one time I went back, went diving, and was shocked at what I saw. Almost nothing, just a few drab-colored minnow-sized fish, and a sea floor that looked like a moonscape … or pot-holed pavement, void of any vibrant life. The entire cove environmental ecosystem collapsed. It was quite scary in that if you think about our larger environmental issues, we could be facing a collapse like that on a large scale in the future.

How have you stayed connected with NOLS?

It did so much for me as an individual that I always felt like I wanted to somehow stay connected to that, and eventually support that. I did sponsor a younger person to go to NOLS … and I would show my NOLS slides, pass out brochures [in communities I was living in]…[I tell parents if their children] have a connection with nature, then NOLS is a wonderful place for them to be, so I think that more than keeping myself attached, it was trying to get other people attached to NOLS.

Jim Acee now lives in Idaho with his wife, staying connected to the outdoors through whitewater rafting trips, skiing, and trips back to Baja in the summer. He plans to continue becoming a better dancer and enjoy life as much as possible. You can read the first part of his interview, in which he talks about his student course and the early days of NOLS Rocky Mountain.

Read about ways NOLS is working to protect its outdoor classrooms in wilderness areas, like the Sea of Cortez, on the Environmental Stewardship & Sustainability page of our website.

As an undergrad studying outdoor education, Andrew Bobilya didn’t aspire to be a professor. He didn’t plan on going into academia. Like many expeditions, his career didn’t follow exactly the path he expected.