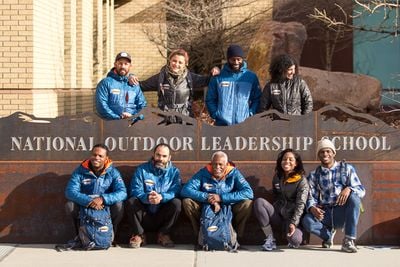 Tyrhee Moore, for example, hails from Washington, D.C. The youngest member of his team, he was fortunate enough to attend a summer camp in Wyoming in middle school. Had he not had that exposure to the backcountry, he might never have discovered all the wilderness has to offer. Now a NOLS student, a former NOLS fellow, and the NOLS catalog “cover boy,” he is in a unique position to expose his peers to the excitement, accessibility, and “coolness” of outdoor adventure.

Ryan Mitchell has long been a driving force in bringing underrepresented youth into new fields, ranging from math and science (which he teaches at DeVry) to cycling. Expedition Denali is another step in a lifetime of making a difference for future generations.

Adina Scott didn’t realize not all families treasure the outdoors like hers did until she was an adult. Casually and through outreach organizations, she has introduced friends of all ages to the wonder of the Pacific Northwest’s great outdoors. She believes in the power of adventuring in the wilderness and sees Expedition Denali as a means of bringing many new friends into her playground through Expedition Denali.

This is just a taste of the rich insight and experiences the team members and instructors will bring to the climb and outreach efforts. The reliability of each and of the team as a whole will fuel the mission of Expedition Denali—to inspire diversity in the outdoors—as they and their cause climb to new heights.