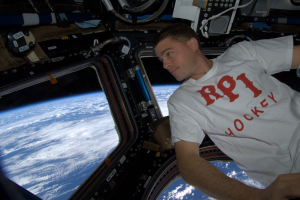 Reid enjoys the view from the Cupola on the International Space Station.

First, a little story. I was walking with five classmates, two astronauts, and two instructors. We were tired. We were dirty. We were in search of water and a campsite. We had just rappelled down a slot canyon and were now trudging along with heavy packs. Storm clouds approached and a few drops of rain started to hit my arm wiping away a thick layer of canyon dust.

As I walked next to Rick Rochelle, I muttered: “Ah shit, just what we need now. Rain.” Without missing a beat, Rick turned to me and said “This rain feels AMAZING after a long hike, I love it!” He was dead on right. It did feel amazing. And I went from unhappy to loving it in one sentence.

When I look back on the last five years from Navy pilot to Astronaut Candidate to living on the International Space Station, several events really stick out in my mind. Last landing on an aircraft carrier, NASA selection day, arriving in Houston, first run in the spacesuit at the NBL (Neutral Buoyancy Lab), and of course, launching on a rocket and living in low earth orbit. Most people only dream of craziness like this and yet here we are living it. How do you train for a journey such as this?

Some of you already possess these less tangible skills. Others, like me, think you know these skills but don’t really have a firm grasp on them, and that is why you are here now, at NOLS.

I am not an outdoorsman. I was a fish out of water on my first NOLS course.

My two weeks in the canyonlands of Utah taught me more about living and working in space than any other single activity at NASA. Here’s why.

Upon arrival at the ISS, you will be lost in a confusing multidimensional world with a feeling that 5+ years of training has done absolutely nothing to prepare you for this. Floating is amazing but it comes at a price. Confusion. Disorientation. Loss of situational awareness. I specifically remember feeling these same things on my first night in the desert at NOLS. I had no idea how to live. How to work. How to help. How to organize this gigantic pack of gear. I lost stuff. I got upset. I had moments of elation followed by moments of fear followed by moments of confusion.

These feelings perfectly sum up launch day and week one on the ISS. On arrival to the space station, within minutes, Swanny [Steve Swanson] (who is my commander and also was my instructor astronaut on NOLS) told me to treat this just like the canyonlands. He used those exact words and it was precisely what I needed to hear. He took over my life for about an hour as a father would.

Priority #1: get your sleeping gear out of the Soyuz spacecraft and let’s set it up. Then he showed me very briefly how to use the toilet in case I needed it during the night. After that, he taught me how to find and prepare food as well as what to do with garbage. He knew I couldn’t process more than that at the time so he stopped there and left me alone. Exactly what I needed. 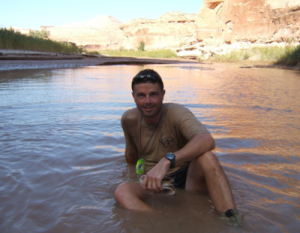 Reid bathes in the Dirty Devil River on a 2010 NOLS expedition in Utah's canyonlands.

On day two he took it a bit further and helped me find my clothes and hygiene supplies so I could set up my crew quarters, get cleaned up, and get settled in. Sound familiar? It should. Once you start to compartmentalize the basics up here, just as you do in NOLS, life becomes manageable. Only then can you start to become an effective member of the team. I was lucky to have someone like Swanny here to help me compartmentalize the initial shock of arriving to an expeditionary outpost, which lacked gravity.

After I got settled in, it was time to start working. It takes a lot of effort and attention to be a good member of this massive NASA team. NOLS is going to give you the pieces to the puzzle. I would like to highlight what I believe is the most important piece for me: expedition behavior.

My two USOS crewmates, Swanny and Alex, are absolute pros at expedition behavior. Just watching them I have learned amazing amounts of what good behavior can do for the morale of an expedition. Alex is the quiet crewmate who never passes a full trash bag without emptying it. Swanny is quick with a joke to ease any tense situation. Neither of them ever excludes, rather they make a point to find us all when telling a funny story or sharing a little treat from their own bonus food containers. Those simple little acts seem meaningless, but up here they are golden.

I saw similar acts during both of my NOLS courses. On my second NOLS course, Mike Hopkins was the fire starter. He was the best at it and yet he would always let me give it a shot if I wanted. If I failed, he helped. If I succeeded he sat back, enjoyed the fire, and said “nice work buddy.” This is another small yet very effective example of good expedition behavior that has stuck with me. 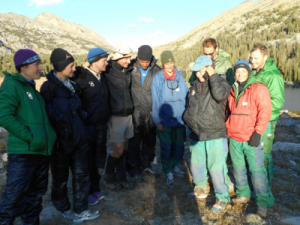 NASA astronaut candidates chat with Reid Wiseman via satellite phone during their NOLS expedition in September 2014.

I will close with this: It is lunch-time now on Saturday afternoon, July 26, 2014. I think I’ll float on over to Node 1 and warm up some bland, tough meat in a pouch which tastes like all the other bland, tough meats in pouches. But I will open it, smile and say: “This meat in a pouch is AMAZING after a long morning. I love it!” And it will make me happy.

Reprinted with permission of Reid Wiseman. At the time of this post, Reid is in his sixth month on orbit, preparing to return to Earth.

Learn leadership on a NOLS expedition.

Casey is a NOLS instructor and worked for a while as the sales manager for NOLS Custom Education.

Astronaut Grunsfeld On NOLS - From Space 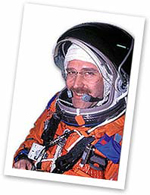 Here is a recent post by NASA Astronaut John Grunsfeld on the "NOLS Share Your Leadership Story" web page.