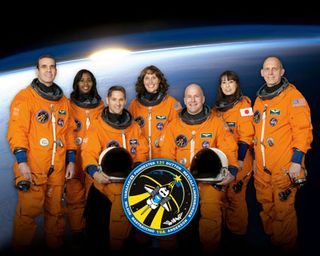 This morning, the Space Shuttle Discovery touched down at the Kennedy Space Center, with all on board safe, sound, and back at home. The crew (pictured above) includes Commander Alan (Dex) Poindexter, Pilot Jim Dutton, and Mission Specialists Rick Mastracchio, Dorothy Metcalf-Lindenburger, Stephanie Wilson, Clayton Anderson, and Naoko Yamazaki.

With Discovery back on the ground, NASA's shuttle program is left with only three more flights. But that doesn't take away from the fact that Discovery's expedition set the record for the most female astronauts - and female NOLSies - in space. Dorothy, Stephanie, and Naoko joined Tracy Caldwell Dyson, a 2001 NOLS grad who was already in orbit.

Congratulations to the entire Discovery crew, and a special shout out to the ladies on board!

Aparna is a NOLS instructor and has been the PR and Marketing Intern, PR specialist, and the Diversity & Inclusion manager at NOLS. She is a founding partner of The Avarna Group (theavarnagroup.com).