In this photo series, get a glimpse of life in the Brooks Range of Alaska in the Arctic Circle. On this forty-day course, Stéphane documented the ten-day hiking section in Gates of the Arctic National Park where his course came across wildlife including caribou, Dall sheep, arctic foxes and one of Alaska’s most famed predators.

In the twenty-four day paddling section, Stéphane travelled the entire Noatak River to the Chukchi Sea. His photos capture some of the dramatic weather and colors that have secured Alaska’s reputation as America’s wildest frontier.

The hour after being dropped in the middle of nowhere by a float plane, we were quickly surrounded by hundreds of mosquitoes. While concerning at first, we quickly learned how to avoid and live with them during the course. 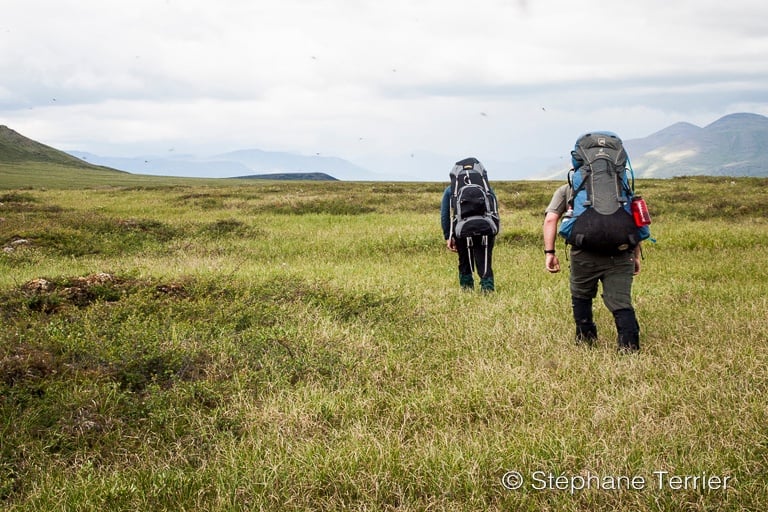 That day started under heavy rain that turned into snow when we crossed a pass. It eased off in the afternoon and the clouds started to clear. In the photo below, we were arriving on the hill that we would camp on, offering a striking view of the mountains freshly covered with snow. 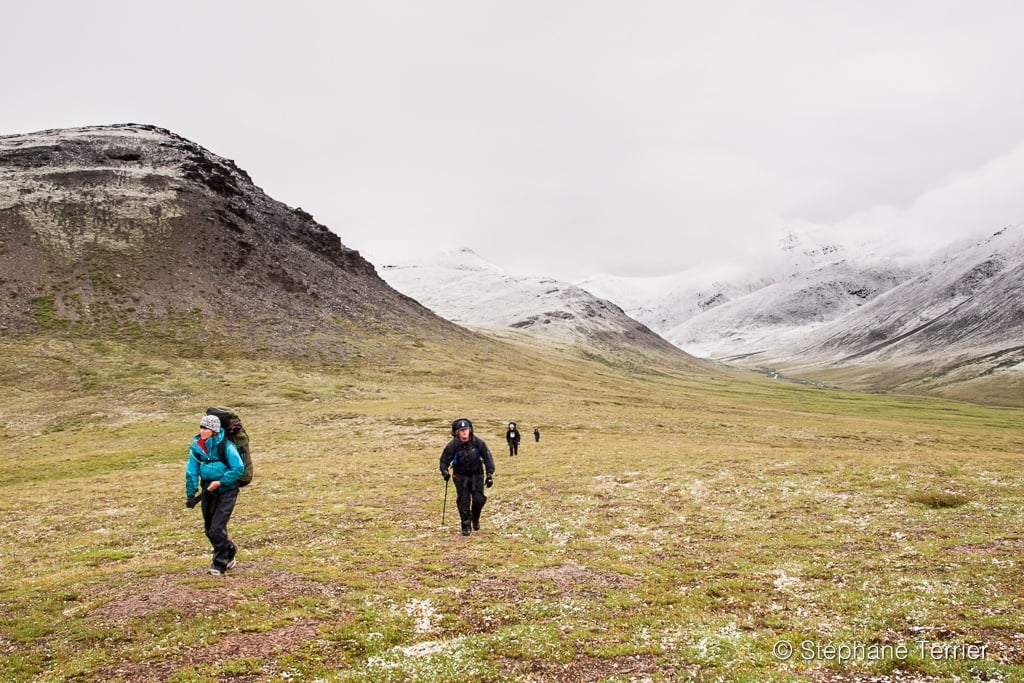 After hiking for eight days, we saw the Noatak River, which we would paddle down to the Chukchi Sea for the first time. We felt small in this monumental landscape. 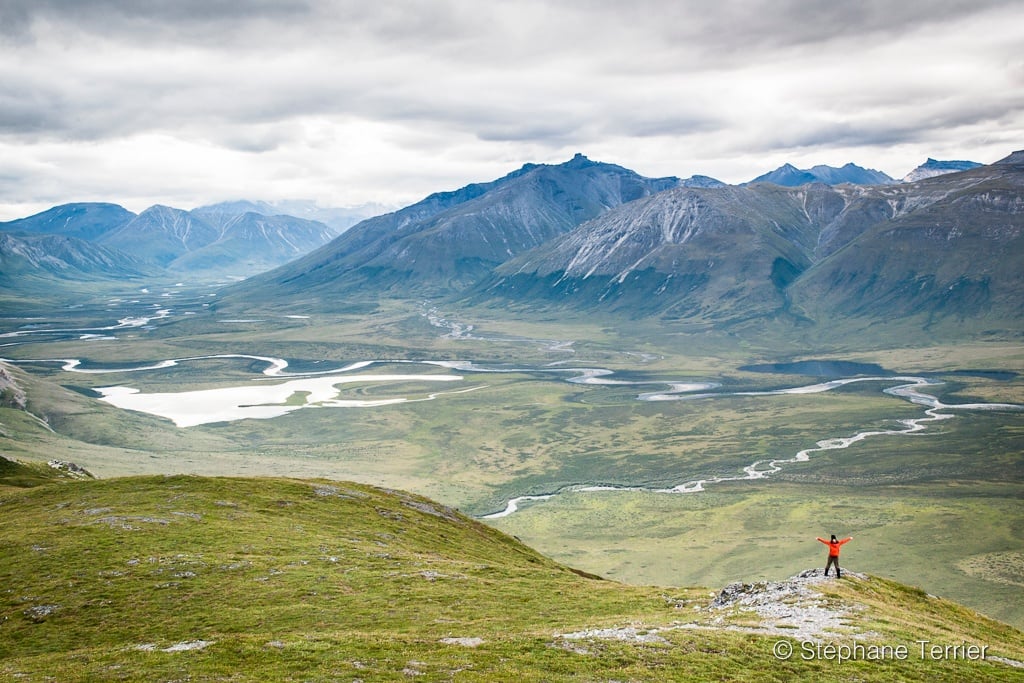 From time to time, we saw herds of Dall sheep grazing in the distance. One day someone spotted a single white spot in the same area, and after a while we realized it was a wolf! It trotted towards us and came within 30 meters of our camp. Like us, it was both suspicious and curious. 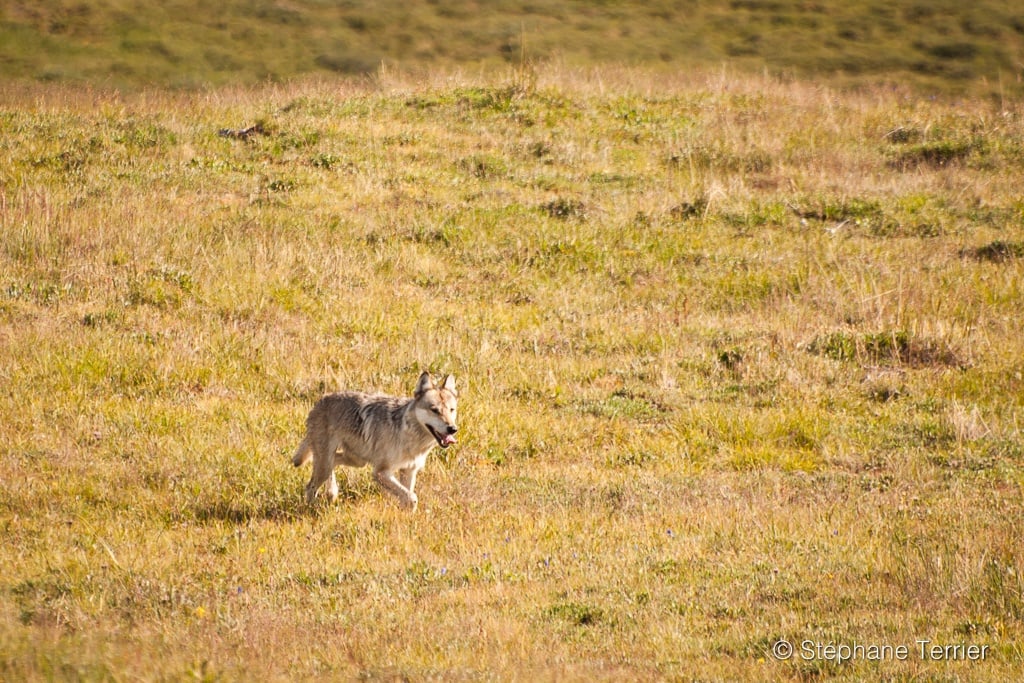 The last campsite of the hiking section, with a spectacular view of a small alpine lake, the Noatak River Valley and Mount Igikpak in the distant clouds, the tallest mountain in Gates of the Arctic National Park. 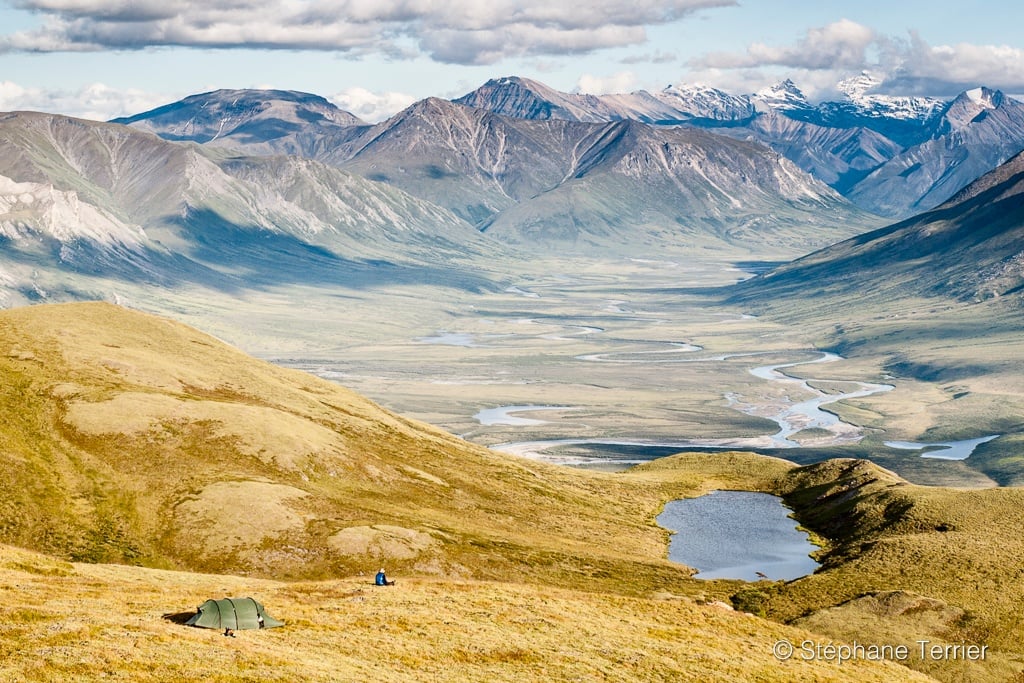 At the end of the ten-day hiking section, we traded our backpacks for large drybags at Lake Pingo. Two floatplanes brought us all the canoeing equipment and food for the twenty five remaining days. 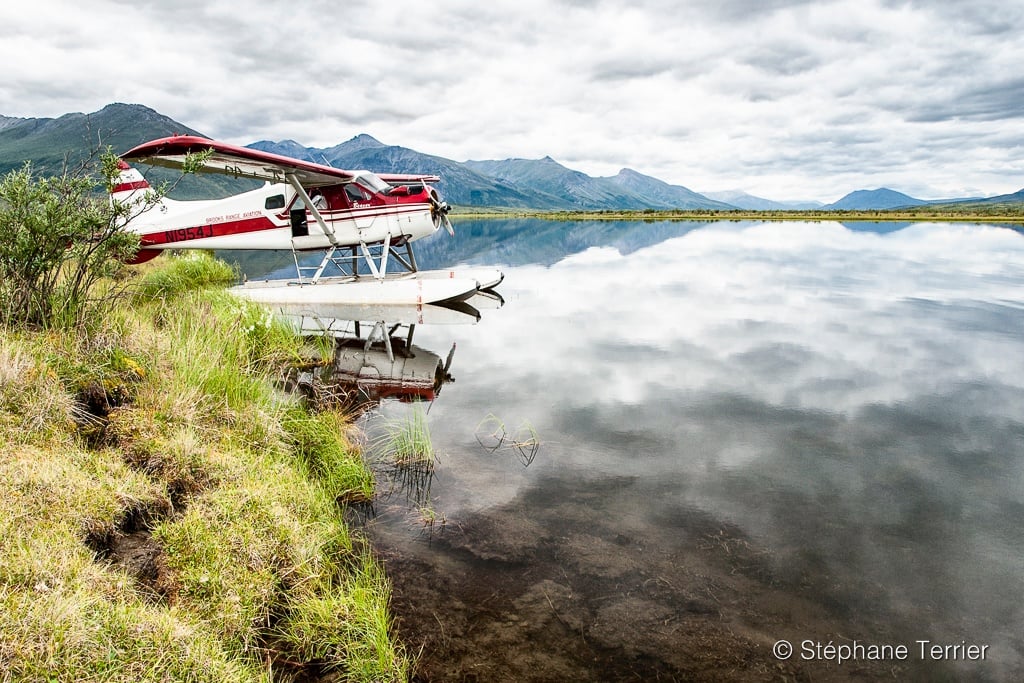 Paddling down the Noatak River. At the beginning, everyone made a couple full circles on the river before figuring out how to steer a canoe. 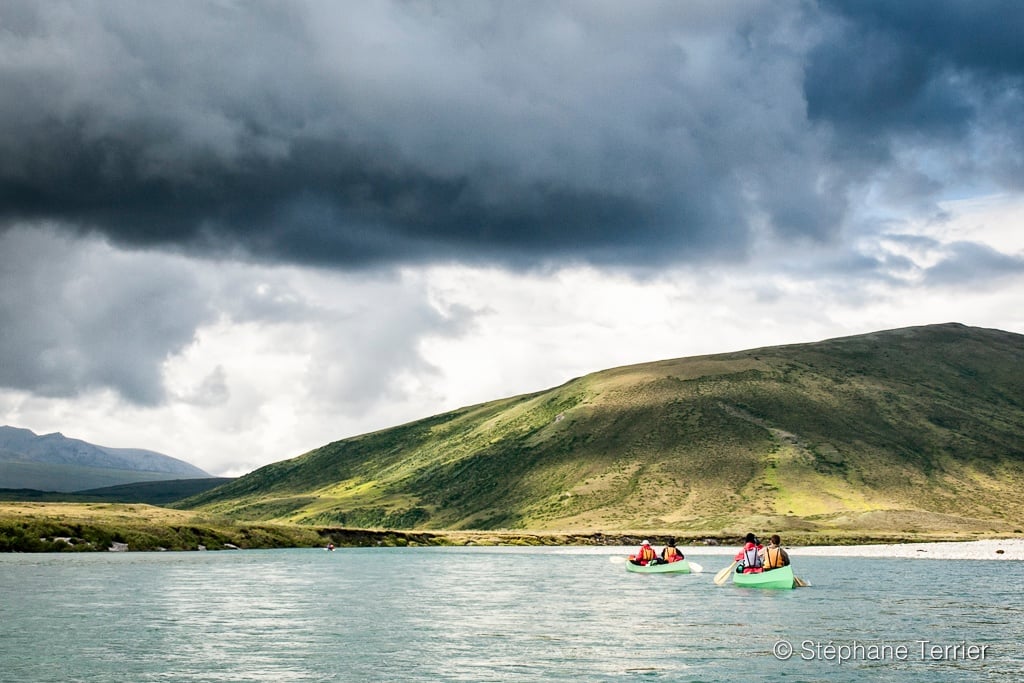 We had a briefing every morning before starting to paddle. This particular morning, it was the first time in 18 days that we had clear blue sky. It felt amazing. 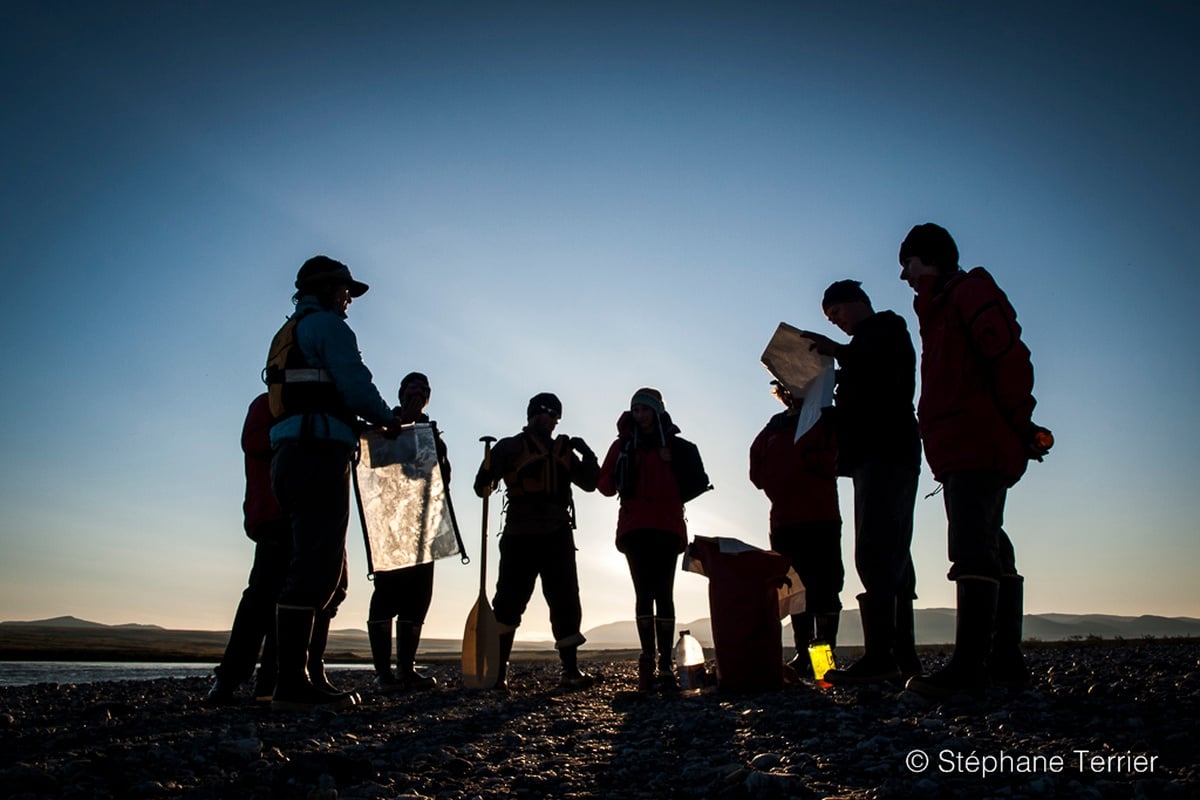 Emotions aren’t easily conveyable in photos, but this one reminds me every time of the serenity and peacefulness of living a simple life in this grand landscape. 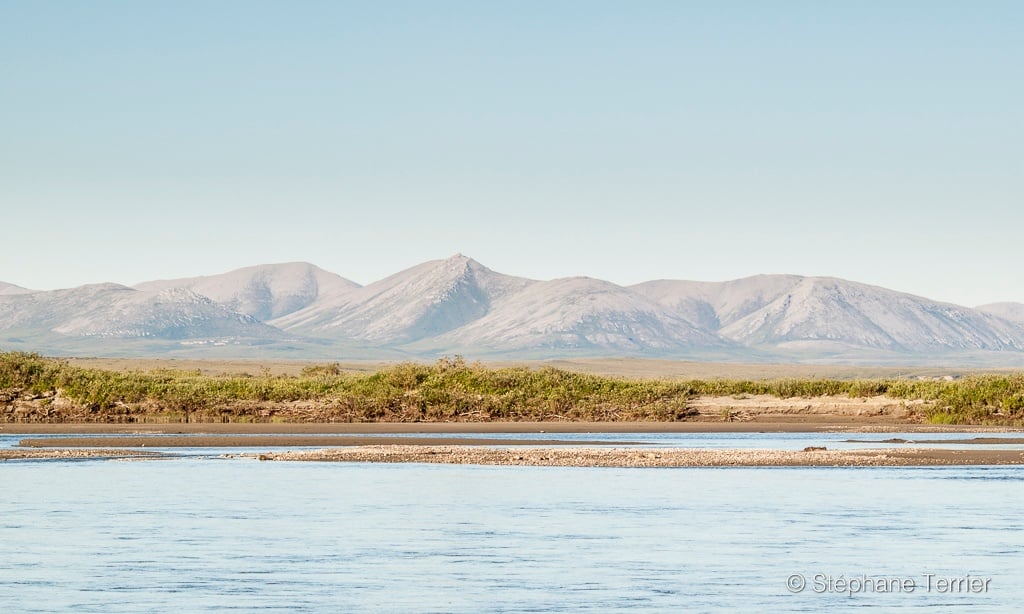 Finishing loading the canoes in the morning. We started the course with the midnight sun, but lost an average of about 10 minutes of sunlight every day. 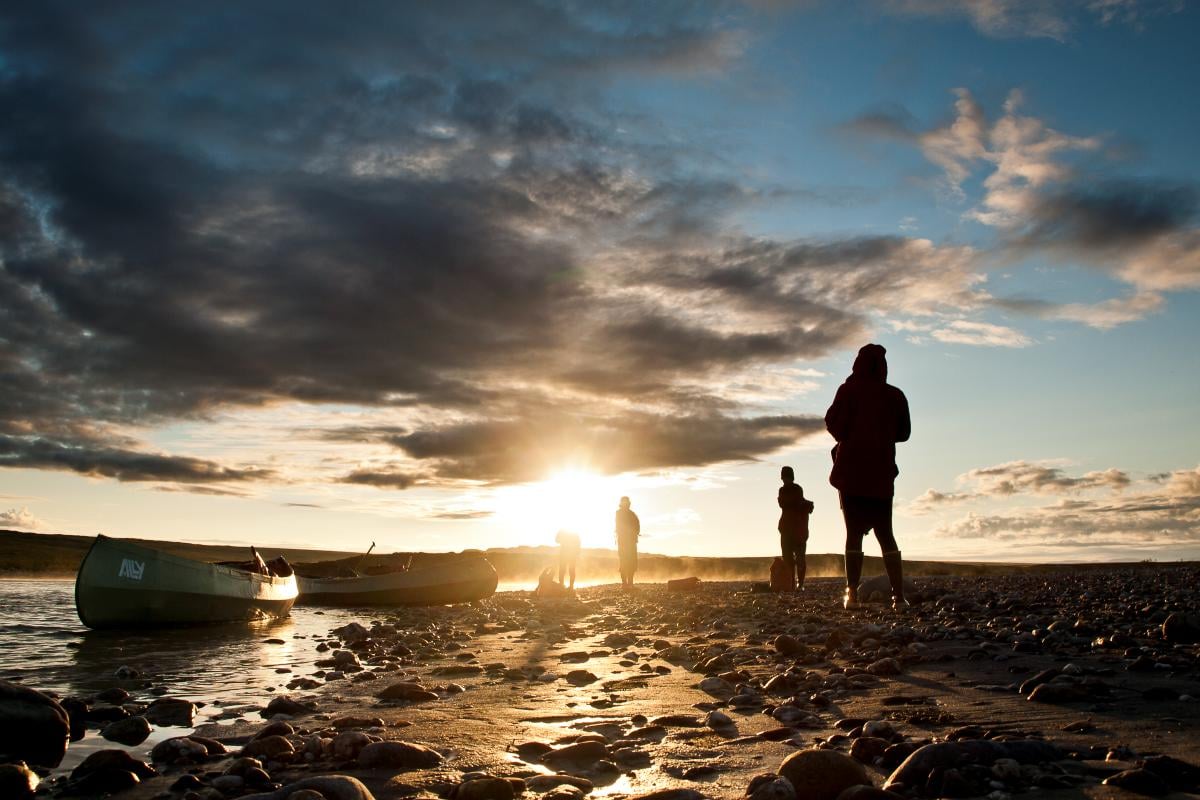 The confluence of the clear Cutler and the muddy Noatak rivers. 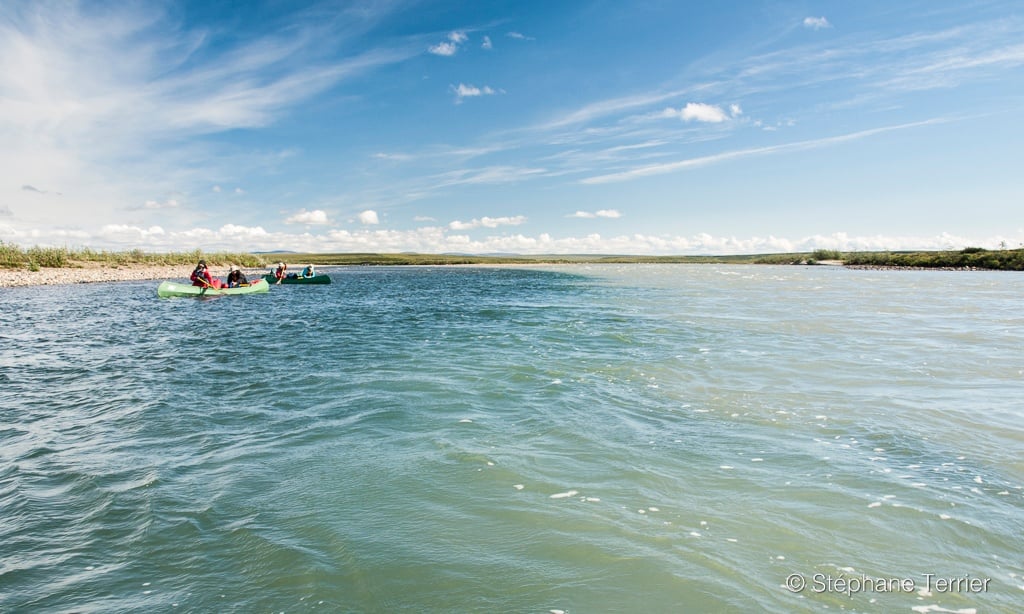 Breaks are always moments to play games, talk or simply have fun. 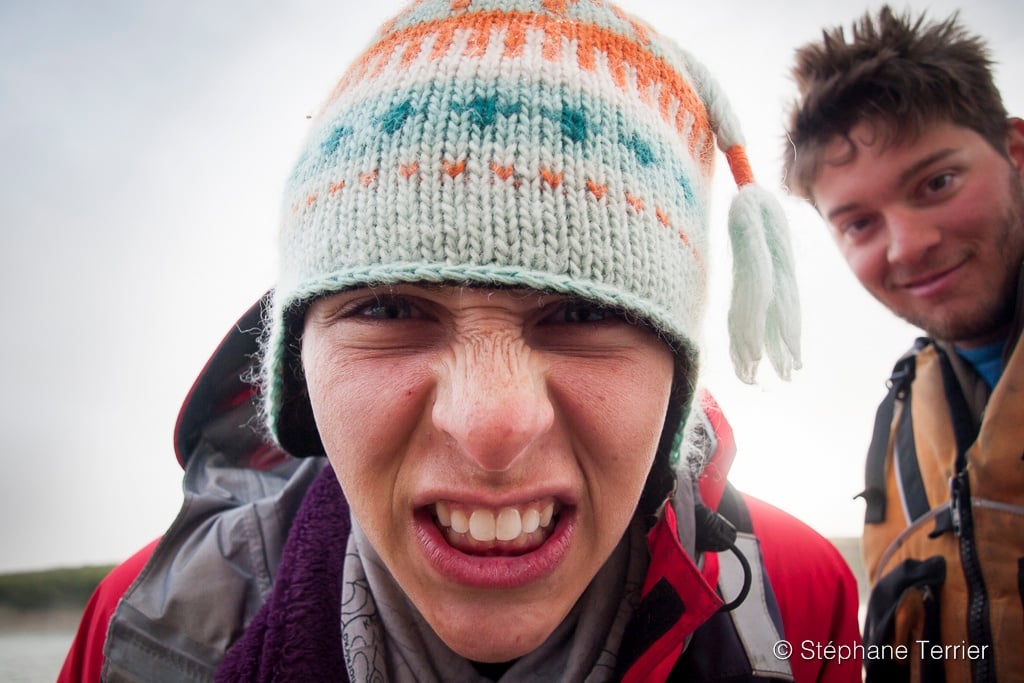 Besides the traditional NOLS pizza or cinnamon rolls recipes, we took advantage of the abundance of blueberries to improvise a delicious pie.

Most of the 750,000 caribou of Alaska live in the Arctic Circle. After seeing many antlers in the mountains, we saw dozens of caribou cross the Noatak River on their migration to the winter grounds south of the Brooks Range. 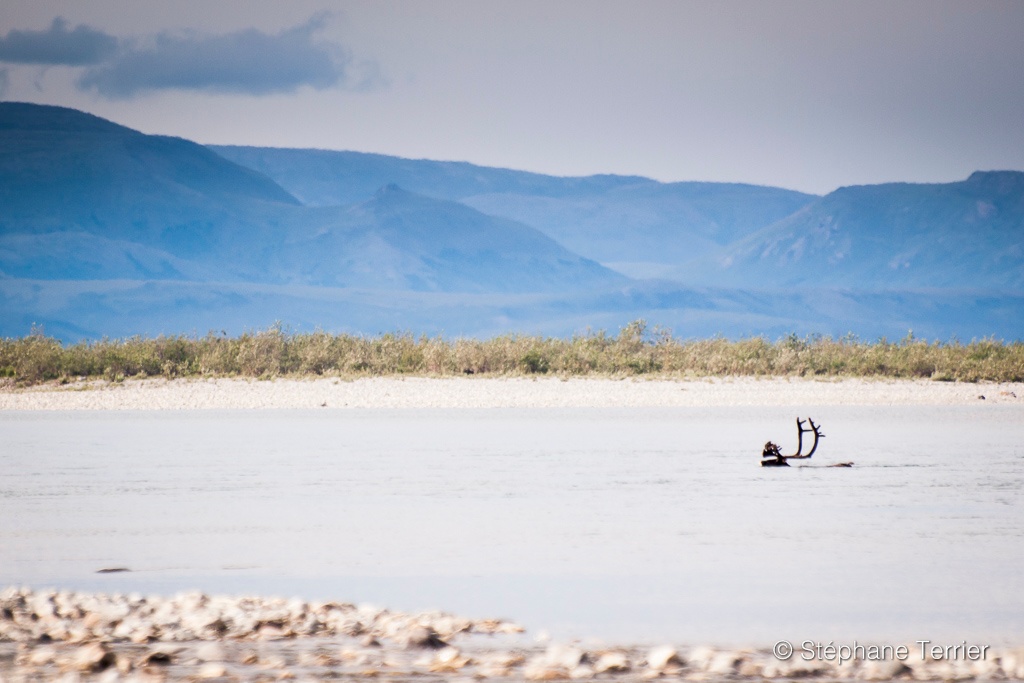 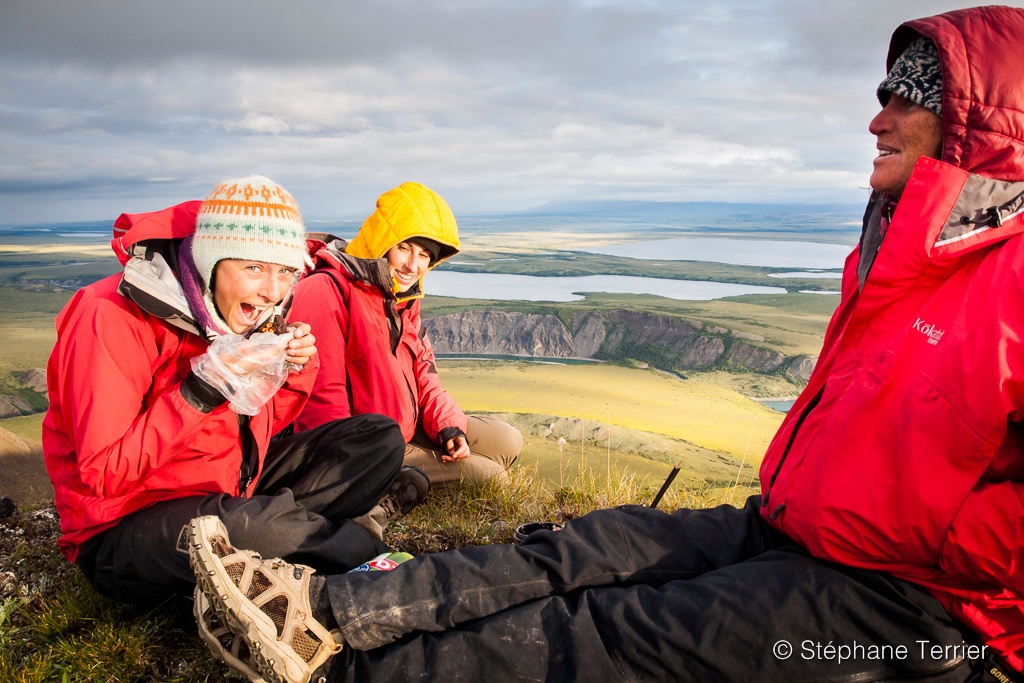 One of the highlights of the course was meeting Ricky Ashby, an Iñupiat native living by himself in his cabin at the edge of the Noatak River. 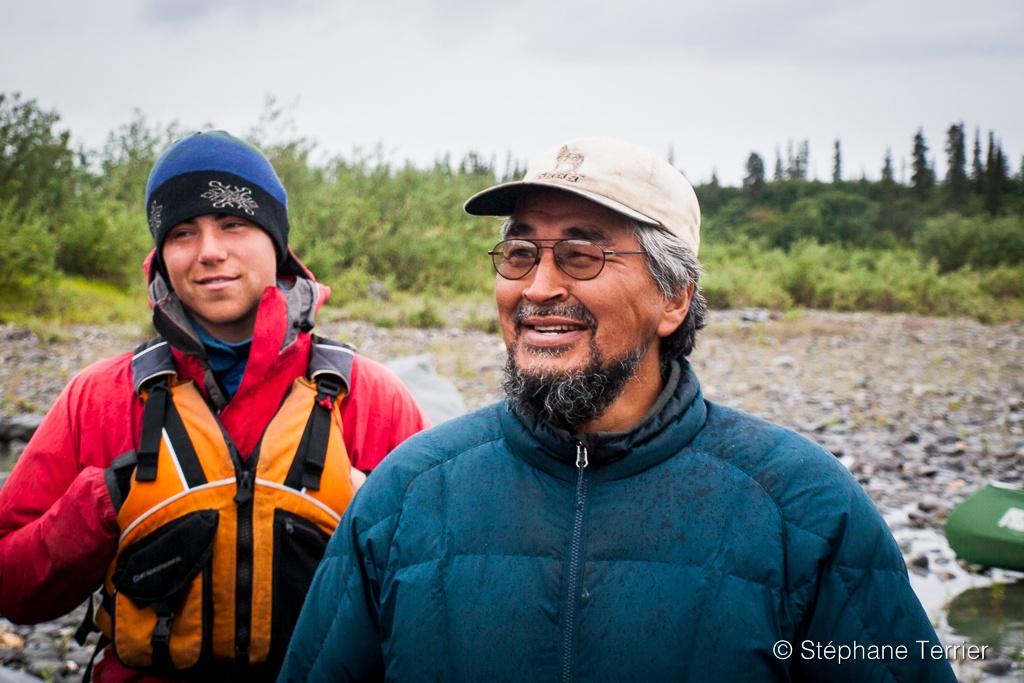 Ricky caught a few fish in a matter of minutes and cooked them for us. He also invited us in his sauna, which was an incredible experience after twenty eight days in the wilderness. We were very touched by Ricky’s incredible and inspiring hospitality. 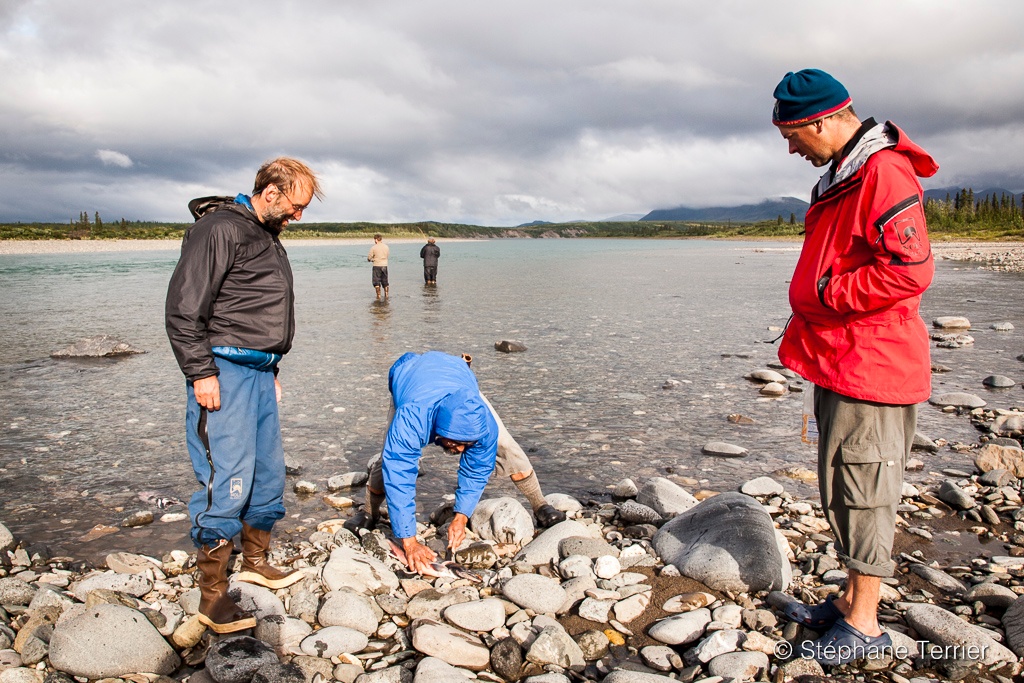 Further down the Noatak River, Daniel caught a chum salmon and cooked it over a fire for dinner. 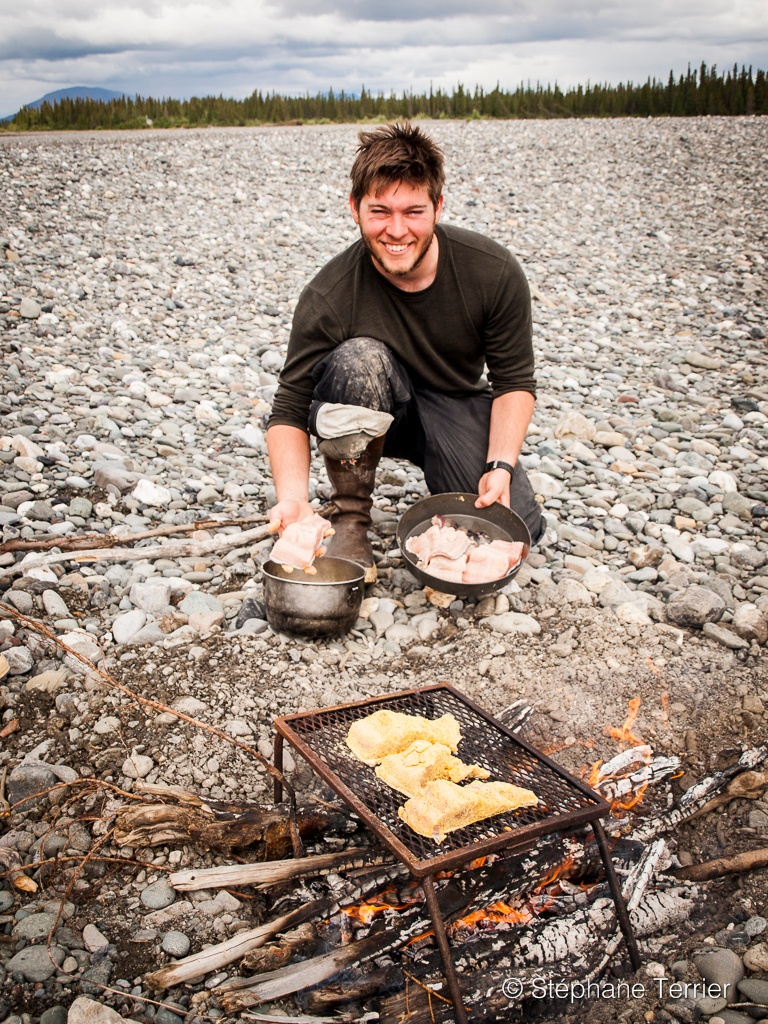 Sunrise on the Noatak River before being hit by a major windstorm in the afternoon. Alaska is notorious for its constantly changing weather. It gave us a few spectacular sunrises like this one, which I will never forget. 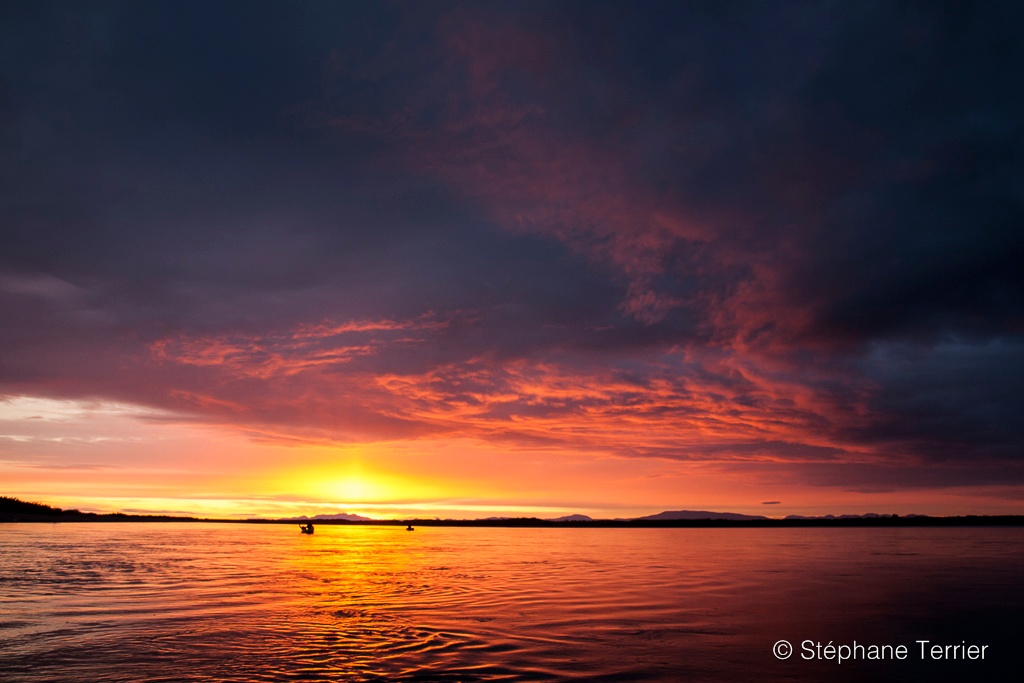 The nine course members in the mudflats of the Noatak River delta an hour before reaching Kotzebue, our final destination after paddling 718 kilometers / 446 miles in twenty four days. 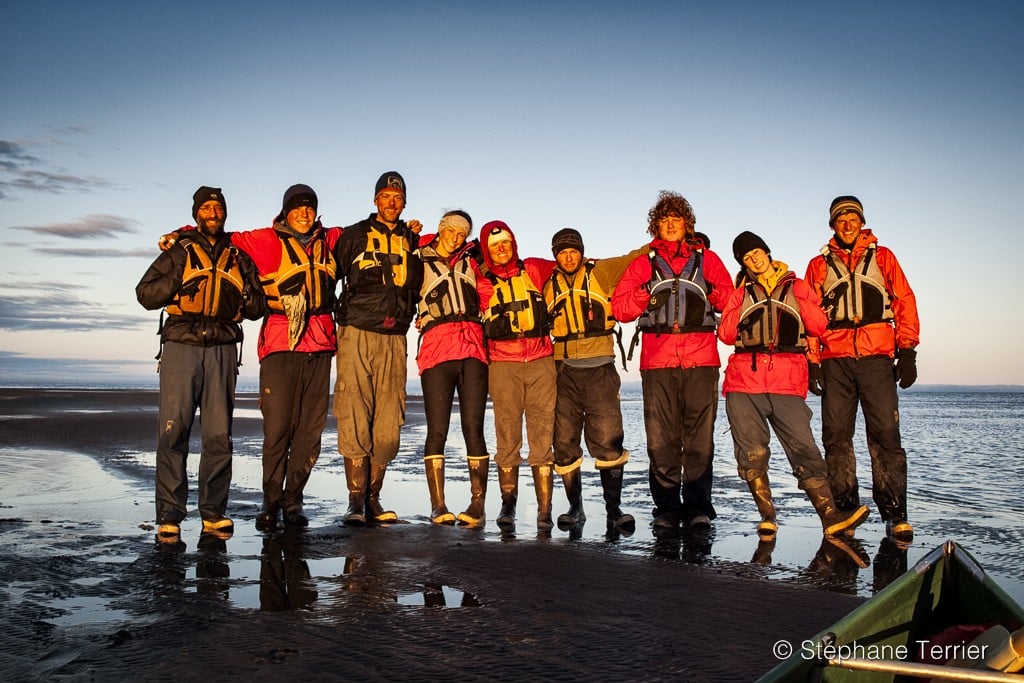 New Frontiers: From the Netherlands to Alaska 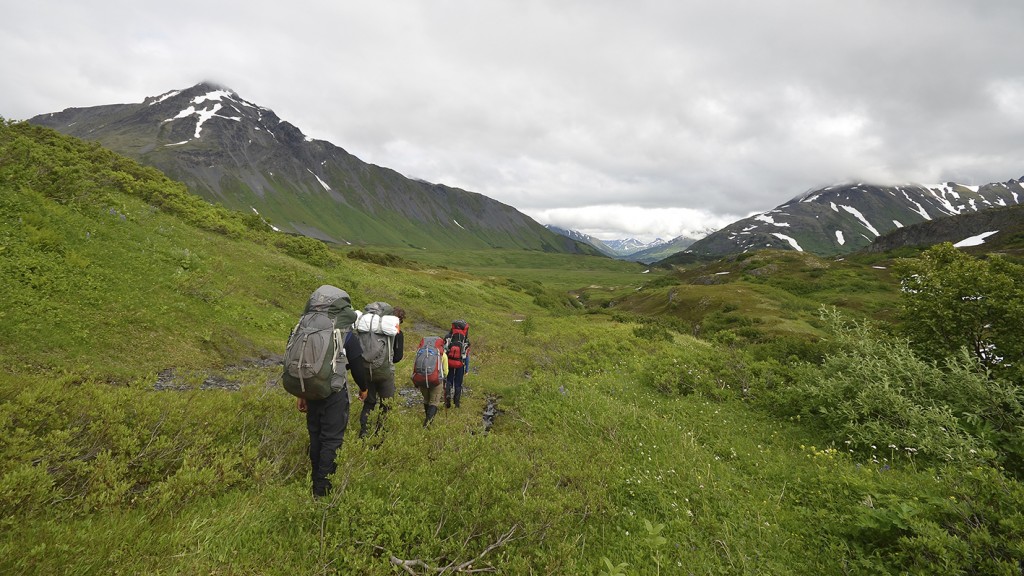