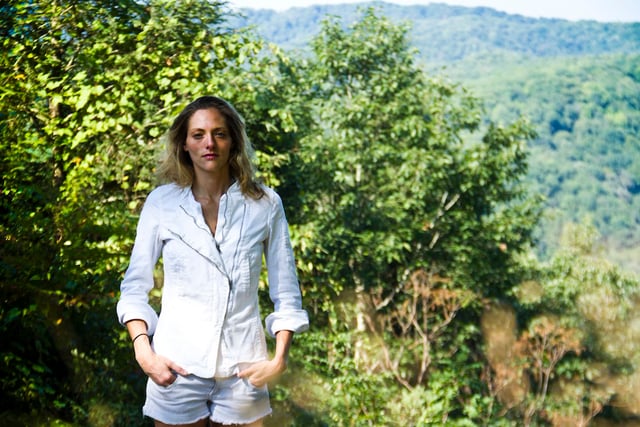 Mary Brent Galyean is an unusual chef: she rarely uses running water, and she prefers cooking on an open flame to an indoor stove. She’s cooked all over the world, from Antarctica to the Andes to a cliffside in Hawaii. Plus, she makes her ricotta cheese from powdered ingredients.

“Real chefs will turn their nose up at that really quickly,” she says, but that’s the way she likes it—and her clients seem to as well.

Galyean is a self-titled expedition chef, a job she invented for herself. This past summer, she’s been cooking for rafters riding the intense rapids of Cherry Creek in California—and riding the rapids herself.

“Whatever the adventure is that you want a cook for, I get to do it,” she says “If I can’t do the adventure, I do not go. I can cook at home.”

A three-time NOLS graduate, Galyean credits NOLS with both her love of cooking and her love of adventure. Her favorite part of NOLS? Combining learning new skills with the thrill of finding herself capable of performing well on difficult expeditions.

“I tell people that the great thing about NOLS is that once you’re on it you’re on it. Once you’re halfway through that first day, with that pack on your back, you start to realize how tough it is, but you can’t sit down, nobody’s sending a chopper for you … the only way out is through … you are forced to see what you are capable of, and I just love that about it.” 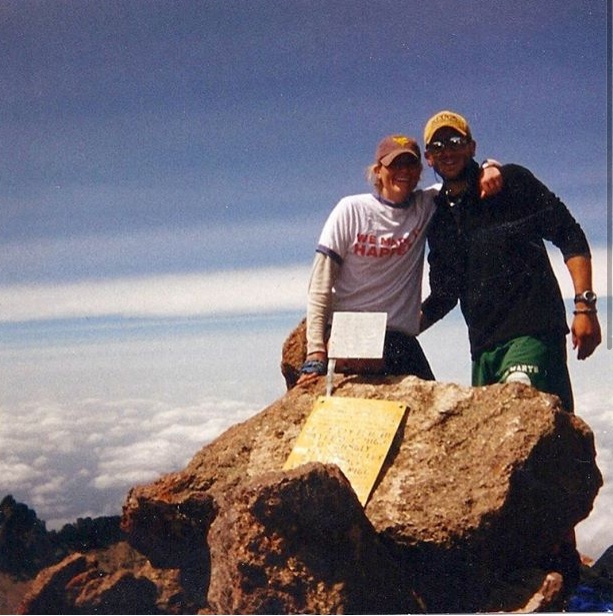 Galyean on the summit during her Semester in Kenya. Photo courtesy of Mary Brent Galyean.

In addition to feeding her sense of adventure, Galyean also credits her NOLS courses with nurturing her love for cooking, both for pleasure and for survival.

“I hated getting up early to get water, I just hated it ... But [my coursemates] started taking my tarp down on top of me [on my course] in the Wind Rivers, and so I’d say, ‘I’m not getting water, but I’ll learn to cook cinnamon rolls … how about that?’ And I started learning how to make calzones and so on.”

During her Semester in Kenya in 2001, “my love for cooking outdoors flourished … we had enough time and we were in enough different environments for me to really play around with [cooking], and I kind of turned into the group cook.”

Three NOLS courses may sound like a lot, but NOLS is a part of Galyean’s family. Cousins, godbrothers, and siblings have all attended NOLS courses, and some have even worked as instructors. In Galyean’s house, if you wanted a driver’s license, you needed to “learn that toilet paper was a right, not a privilege.”

Galyean adds that her mother, the driving force behind sending her children on courses, wanted her daughters “to learn how every small movement we made affected our safety and the safety of those around us, and she thought that NOLS was a just a fantastic platform to learn that.”

Though her mother has passed away, Galyean kept a letter she wrote to her from her Semester in Kenya.

“It’s addressed to [my mom], and the return address is ‘Land Cruiser with NOLS written on the side of it somewhere in the middle of Kenya.’” Her mother would say that “she always got her favorite Mary back off of NOLS. The girl that got off the plane was always her favorite.”

That resilience and love for cooking in the outdoors have contributed to Galyean’s success as a expedition chef today.

“The two things that are most unique about what I do: one is that I typically don’t use any electricity or running water. Some chefs are fancy and like those kinds of things, I prefer to not have either, really. The second thing that NOLS instilled in me is just the addiction to adventure … which means I exchange being a cook for the adventure.”

She learned plenty of tricks at NOLS that she still uses in her cooking.

“I make a lot of homemade breads on my sites, and the recipe I use isn’t specifically the one that I’d use to make calzones [on my course] ... but it started 17 years ago with learning how to make calzones in the woods. The most important ingredient that I picked up from NOLS was the spice kit. My spice kit is so clutch.”

What does an expedition chef pack in her spice kit to make food tasty when you only receive re-rations once a week for rafting clients expecting 5-star dining? 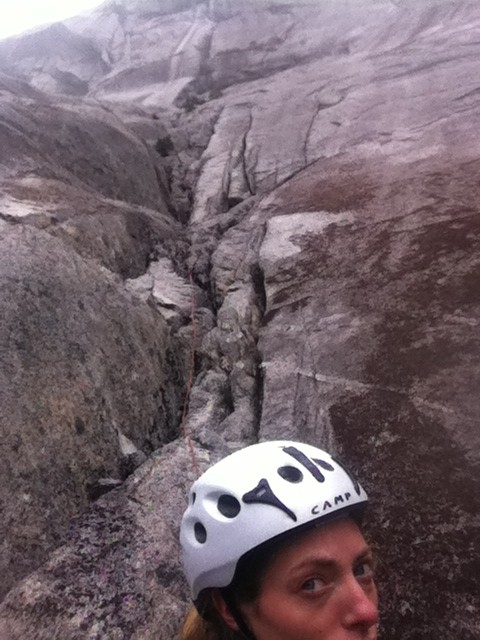 Getting her adventure on while climbing the Andes in Chile. Photo courtesy of Mary Brent Galyean.

Despite having a well-stocked spice kit, Galyean still finds plenty of challenges to contend with as she cooks outdoors. For her, “the toughest ingredient is weather and fire. Once you learn how to harness fire and use it properly, it’s hard to cook indoors again.”

Being able to create incredible meals in the outdoors is what led Galyean to her latest accomplishment: competing as a chef on the television show Chopped.

By coincidence, she met an engineer from the Scripps Network while working as a chef for a rafting company in California. This engineer then brought her to the attention of the Food Network, and after a meeting in New York she was invited to compete on Chopped.

“Competing on TV is one of the most nervewracking—it’s tougher than maybe anything I’ve done in the woods,” she reflected. “It is insane.”

However, she also predicts that being on the show will help the outdoor industry:

“I think it’s bringing some attention to [the outdoor industry]. The outdoor industry is amazing, and the people that are in it do it for pure love, it is obviously not for the money or the convenient hours, because it is none of those things. It’s a grueling life and you have to just love it and be a little insane to want to do it for a living.” She noted, “[Chopped] shows people an insight to it without being necessarily reality television or putting some sort of spin on it or making it un-relatable. A lot of times I get to cook for people … who don’t live in this world, and I think it makes it more accessible.”

With that in mind, Galyean has plenty of her own adventures coming up.

“I do Gauley season every fall, which is [whitewater rafting] in West Virginia, and coming up this fall I get to go and run the Karnali [River] in Nepal, and go to Turkey, Mongolia, and Siberia in November and December.” More long term, she says, “My goal is to cook on all seven summits—I want to make a souffle rise on all seven summits … It’s just a big bad world out there. I’m trying to go to every part of it.”

Like so much of what she does, she credits that spirit of exploration and her itchy feet to NOLS.

“It comes back to NOLS in the Wind Rivers. I remember we didn’t have a compass, we didn’t have tents, we had tarps and topographical maps. Sometimes there’s a trail, but usually there’s not. You wake up, you pick where you’d like to camp next in the general vicinity, and you find a water source that you hope is still there … and that’s kind of how I live my life. I wake up every morning and I find my water source … and I set a path that I hope gets me there, and if not then I hope I find an alternate route. And so [NOLS] taught me to remain safe while remaining flexible.”

“It comes back to NOLS in the Wind Rivers. I remember we didn’t have a compass, we didn’t have tents, we had tarps and topographical maps ... You wake up, you pick where you’d like to camp next in the general vicinity, and you find a water source that you hope is still there … and that’s kind of how I live my life. I wake up every morning and I find my water source … and I set a path that I hope gets me there, and if not then I hope I find an alternate route. And so [NOLS] taught me to remain safe while remaining flexible.”

And no matter where she goes, she always carries a little NOLS inspiration with her: “On top of every single stack of books every place I go, the top book is the NOLS Cookery. Every single place. It is right by my bed … I carry my NOLS library everywhere I go.”

“I’m never done being a NOLS student … So I’ll be back, don’t you worry,” she concluded.

Gauley Overnight Chef: Mary Brent Galyean from Adventures On The Gorge on Vimeo.

What I Learned About Resilience from Swimming an Icy Canyon Pond

Limb-numbing cold water drips down my shirt and pants. Uncontrollable, body wracking shivers. Shallow, quick breaths don't quite fill my lungs. Tears that I couldn't hold in any longer rolling down my cheeks. I hate this. I want to go home.