NOLS Icon: Andy Carson on Instructing in the Early Days

NOLS is turning 50 this year, and with that big birthday on our horizon, we’re taking a look back and celebrating some of the incredible individuals that made NOLS the organization it is today.

Andy Carson was a student on the first NOLS course, and his presence as an instructor helped create the exploratory and adventurous nature of NOLS courses. Throughout the 1970s, Carson instructed courses for the School out of the Rocky Mountain branch. Continuing his passion for the outdoors, Carson and his wife Nancy, another well-known and respected instructor for NOLS in the early days, owned and guided trips with Jackson Hole Mountain Guides until 2000. I was lucky enough to catch up with him in between expeditions to ask him a few questions about his early days at NOLS...

How did you first connect with NOLS founder Paul Petzoldt, and how did you end up working at NOLS?

I was a student at Colorado Outward Bound in 1964, when Paul was the chief instructor there. We students didn’t really have much contact with Paul, day by day, but it happened that my small group that did our final expedition together came in quite late one night, after dark, and Paul debriefed us. He was in a loquacious mood and I at least (and a few others) hung out and talked about mountains for a long time. 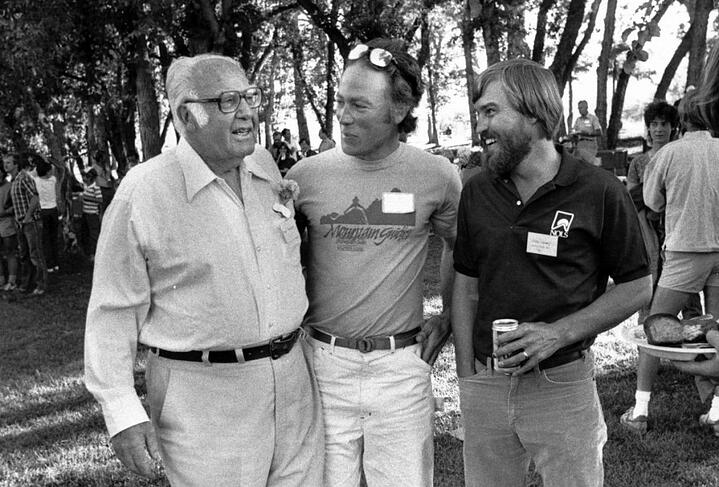 Andy Carson in the middle with Paul Petzoldt, left, and Dave Neary, right.

He talked about Wyoming and the Wind River Mountains, and his dream of starting an outdoor/mountain skills school sometime. Lo and behold, later on that next winter I got a handwritten note from him inviting me to join a course in his new school! At the time, it was more than miraculous and I jumped at the opportunity. Being completely out of any personal connection to a bigger mountaineering community, but totally bitten by the mountaineering bug, this was something of the realization of a dream and a door opened onto my future. Little did I know...

What intrigued you about working with Paul?

A couple of things stand out: first, he was very unflappable, flexible in the face of the unexpected: breakdowns of equipment or vehicles, bad weather for what the plan for the day had been, people not showing up at an expected rendezvous, running low on food. None of that really upset or bothered him; there was always Plan B, or C, or whatever it took to resolve the problem. He had a very impressive ability to adapt to unanticipated glitches.

And his fount of stories that he used to illustrate points made during a "class" were truly endless and very fun, interesting, and educational. But he never maligned the individuals in his stories. In fact, he generally kept proper names out of the mix. Maybe he’d identify someone off the record, so to speak, but he was always quite respectful of that absent person, even if what they’d done was a real ridiculous performance. There’s something to be learned about getting through life and working with people of mixed personalities and habits—call it expedition behavior for everyday living.

For the record, Tom Warren and I were students on the first course, in June of 1965. The instructors were Bruce Barrus, Burt Redmayne, Jerry Taylor, and Jack (I cannot recall his last name), and of course Paul and Tap Tapley.

What was it like to work those early courses?

In a word, fun. And in the next word, a lot of work. We basically did everything from washing clothes and equipment between courses to planning food, picking up and dropping off students, driving to Denver to buy stuff at the Army Surplus Store, and any and every little detail that needed doing to make a course go. Once in the mountains there was a tremendous sense of freedom and independence, along with a kind of "learn by doing" approach to our daily plans. There was no set itinerary, no agenda directing us from start to finish, but more of an overarching goal of developing skills and leadership abilities. We were using the Wind River Indian Reservation lands a lot then, so the whole of the Winds were open to us and we did take advantage of all that country. If we woke up one day and someone said, “Well, I see this place called Europa Canyon on the map that sounds sorta cool. Maybe we should check it out,” that’s exactly what would happen—off we’d go and see for ourselves. Very few people in the range in those days, to run into another group was quite rare, even in a place like the Cirque of the Towers. The time flew by, that’s for sure.

I heard you and Tom Warren were the first course leaders. What was your role? I've heard the title "Super Leader" thrown around, a position that I’m not familiar with—what was the position and were you appointed to it?

Super leader… I do not recall that particular moniker, though when Paul came back from one buying spree in Denver, he had obtained a bunch of bright wind jackets that had been designed for work on carrier flight decks… he had designed (or found, or bought) these little badges with stars… most had one star, some had two, a few had three or four… he wore one with several stars, and some of us who’d been with the school for a while had multiple stars, too, but it really didn’t mean we were somehow superior or had greater authority or anything… we were still washing clothes and sorting gear and repairing packs between courses, just like always.

In those early courses, an instructor was truly a jack of all trades. You’d be expected to be able to teach pretty much any set of skills we had in our sights: rope work, map reading, fishing, cooking, fire building (no stoves in those days), etc. Of course some of us were more able or experienced in this or that aspect of the mountain world and we’d surely take advantage of that, but basically you were to be ready to help your students learn anything we had as part of a course.

Even though he no longer works for the School, Carson has kept his connection with the NOLS community alive. He participated in two Wilderness First Aid courses in 2000 and 2006 and continues to attend NOLS alumni events regularly, including the anniversaries. NOLS looks forward to hosting both Andy and Nancy Carson for the 50th anniversary in October.

Come celebrate with us! Visit our 50th Anniversary page to learn about our birthday celebration coming up in Lander in October 2015 and to get more information about alumni reunions all over the country.

Easing Back Into Your Frontcountry Life

The first few days home after my month-long NOLS mountaineering course, I luxuriated in ordinary things—running water and reconnecting with friends, resting in my own bed after nights of camping in windy, cold mountains. But trading a crowded tent for my own bed also felt lonely. The foods I couldn’t wait to feast on went from exciting back to normal. Rest turned into restlessness. I learned that coming back to the frontcountry is as important a change as learning to live in the wilderness.