A Colorful Partnership: NOLS Grad Teams up with Harry's

Fred R. Barncard once said, “A picture is worth ten thousand words.”

For Jimmy Chin, a former NOLS instructor, this quote became a reality. Today, Chin is known worldwide as one of the most recognized adventurers and outdoor photographers. He works with National Geographic to capture moments of pure bliss and eye-opening expeditions. Chin also started his filmmaking career in 2003 and since then he was built a production company with two partners. 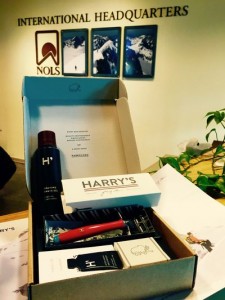 One of Chin’s greatest accomplishments came in October 2006 where he successfully climbed and completed a ski descent of Mount Everest. He became the first American to ski the South Pillar Route. Other expedition highlights include climbing Mt. Kinabalu and Meru-Sharks Fin, becoming the first person to accomplish an ascent and ski descent of Tai Yang Peak, and many more.

The setting for one of Chin’s recent adventures was Grand Teton National Park, one of his favorite destinations. Even though Chin plays here often, as he lives nearby, this trip would be different. He partnered with the co-founder of Harry’s Razors to create limited line of razors based on his accomplishments. On this expedition, Chin and his expedition mates would find themselves not only taking pictures of the outdoors, but also photographing Chin’s new line of razors, a fun project.

Besides teaming up with Harry’s, Chin has been featured through numerous companies.

Chin lives for adventure and has been featured in Outside Magazine, Men’s Journal, National Geographic Magazine, and People Magazine. He currently resides in Jackson Hole, Wyoming where he continues to focus on his upcoming expeditions and keeping a close shave.

We found ourselves in our boat pulling away from the only dry land we could see. It looked as though a normal city neighborhood, with older homes lined up in rows covered by large shade trees, had been built in the middle of a shallow lake.