On January 5, I kicked off the New Year with an adventure on the southern seas. With the support of the Pete Absolon Fund that supports advanced instructor training, I made my first trip to Africa. The goal was to expand my sailing horizons and to gain experience sailing in an unfamiliar place, with bigger seas and more challenging weather. And that is exactly what I got! 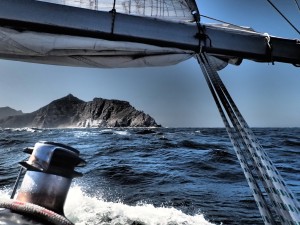 Cape Point and the Cape of Good Hope

I participated in a week of coastal skipper training with a sailing school based in Cape Town, South Africa. This region is known for its spectacular and rugged coastline, ever-changing wind and weather conditions, and often-turbulent seas. After provisioning the boat and making a few repairs, we cast off from Saldanha Bay for our first passage southbound into Cape Town. After a 17-hour beat to wind, multiple sail changes, and navigating the dreaded (often 40+ knot) winds that come barreling off of Table Mountain early in the evening, we finally tied up at the dock just before midnight. I was in for a long week!

The course consisted of multiple passages over 60 miles long that each course participant skippered. This means from the time you cast off until you tie up at your destination, you are in charge of the boat and responsible for the safety and performance of the vessel and crew. After two of my shipmates brought us safely into harbor during their days as skipper, it was my opportunity to take the helm.

At this point, we had already passaged well south and rounded the Cape of Good Hope and Cape Point. Both are iconic landmarks and known for dangerous offshore rocks and occasionally hazardous conditions that have brought more than one vessel to the bottom of the ocean. Already having that experience, I was well prepared to passage there once again. However, this time was different…

It was a beautiful blue-sky day, but the wind was howling! As I stood in the marina looking up at the mast and pondering how I was going to get off the dock, I noticed the wind meter reading gusts well over 30 knots, and this was just in the harbor! Any skipper knows that maneuvering in the tight quarters of a marina, surrounded by very expensive boats on a windy day is enough to rattle your nerves. On top of that, we had witnessed another boat crash the evening before. 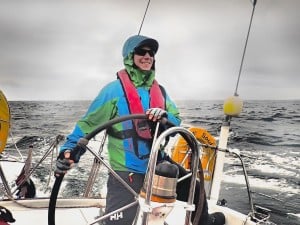 Nick at the helm

Nonetheless, we slipped the lines, reversed out of the marina in a flawless fashion, and soon were underway with a triple reefed main and just enough jib sail to keep the boat nicely balanced. Once again, we beat our way to windward; we finally reached Cape Point in early afternoon. The large seas were very mixed and the strong winds kept all of us alert as we sailed between Cape Point and Anvil Rock and then between Bellows Rock and the Cape of Good Hope, both infamous for their history of shipwrecks. Once we cleared the Cape and the extending reefs and after a sigh of relief, we put out more sail and turned downwind with our destination of Hout Bay in sight. Running with the seas and the wind we reached our maximum boat speed of 12 knots as we surfed down the waves. As the sun began to set, we made our approach into Hout Bay. As if the adventure of rounding the Cape for a second time was not enough, we were once again greeted by the intense winds for which the Cape region is known. Registering 43 knots on the wind meter, we rounded up, doused the sails, and motored into the harbor, securing the boat to the dock just as the last hint of light disappeared on the horizon.

This experience speaks for itself with the inherent challenges; navigating hazardous terrain; and the need for great communication, teamwork, and execution of the plan. This adventure pushed my limits and expanded my horizons as a sailor, skipper, and crew. I can’t wait to share it with my students in the future.

Read more stories about instructor development on the Educators Notebook page of our blog.

Where did you go for your trip and how long was it?