Christian Martin and a group of 17 NOLS instructors, scientists, and rafters recently completed a 30-day paddling trip in northern Peru that was part skills development, part scientific expedition. The trip was funded in part by the NOLS Instructor Development Fund and in part by National Geographic. Here is what they learned and saw. NOLS Instructor Alice Hill on the oars in the Inner Gorge of the Maranon River. Photo by Christian Martin.

Where did you go?

We spent 30 days paddling the Maranon River in remote northern Peru. We boated over 600 kilometers, negotiating hundreds of whitewater rapids up to Class V in difficulty.

What did you do?

We focused on improving our abilities to read and run challenging whitewater in expedition oar-rigged rafts, honing our general river expeditioning skills, and trialling a data collection approach that could be incorporated seamlessly into the expedition. This method will contribute towards data records of important natural resources in remote regions that are under increasing development pressure.

What did you learn?

We finished the trip with a feeling of greater competence in terms of boating safely and skill in remote and challenging areas. Christian, who came to the trip with a relatively lower level of boating skill, experienced the learning curve many NOLS students engage with on their NOLS courses. Being the learner again will improve Christian's ability as a teacher and coach in other skills. He is now a competent class III-IV rower. In addition, it was exciting to develop and trial a data collection component that can be incorporated by future boaters during run-of-river expeditions. Our camp just upstream of a natural hot springs on the Upper Gorge. Photo by Christian Martin.

What did you do for the new data collection method?

We collected a baseline data set of river water quality, geo-morphological observations, aquatic invertebrate diversity and abundance, and photo points for marking visual change over time. This data set was both efficiently collected and rigorous, which makes it useful to research organizations, the government, and local communities as they grapple with issues of water quality and ecosystem health. This is especially important to track as land uses change and new developments, such as mining and hydropower dams, are proposed, as they are on the Maranon River.

The possibility of incorporating data collection into NOLS courses is an exciting and achievable goal that would really emphasize, in a hands-on way, the environmental curriculum we teach on NOLS courses.

What were some trip highlights?

What did you learn about leadership?

We learnt that, even with a group of skilled, experienced and intelligent expeditioners, decisions can be vastly more efficiently managed and effective when the decision-making process is led intently by a skilled leader. Different comfort levels with risk will lead to different information-gathering needs by team members. It is important to respect all of these needs, both for group buy-in as well as for benefiting from varied intuitions and perceptions that may ultimately lead to the most appropriate decision.

This surfaced during our expedition when the group was deciding on our take-out location, a contentious topic because of historic hostilities towards non-locals from the Awajun tribe that lives in the lower jungle river sections. A long group discussion resulted in the majority excited to run deep into Awajun territory. A small minority raised concerns as to events that occurred since we had launched, with a preference for seeking more information from new sources to understand any changes in the Awajun's cultural climate. This move ultimately led to contacting Awajun leaders who suggested we not penetrate deep into the jungle to our originally planned take-out.

It is unclear what outcome would have resulted had we not received this request, but at the least we were able to make a decision respectful to the local cultures and communities while also maintaining team safety.

What’s one of the fun stories from your expedition?

At the very end of the trip we were offered some food from the local Awajun people that live in the lush jungle region of the Maranon. The local offerings included a live white grub about the size of an index finger along with a fermented yucca drink that was traditionally drunk like a shot of whiskey after a toast from the local leader. One of our more culinarily adventurous trip members, Ricardo, jumped straight in and popped one in his mouth, only for the grub, which was still alive to think, "if you're going to bite me then I'm going to bite you." Ricardo's eyes widened as he felt the grub bite but countered with one of his own as he swallowed. Ricardo smiled and said, "that grub just bit me, so I bit him back. I won!"

About the Author: Christian has worked for NOLS since 2009 and previously filled his days working as an environmental planner in New Zealand. He's recently relocated to Colorado.

Interested in going on your own river rafting trip? Check out our course offerings.

Educator Expedition: Reading the Rapids on the Colorado River [Video] 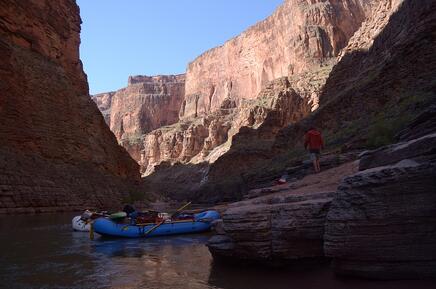